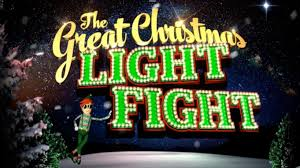 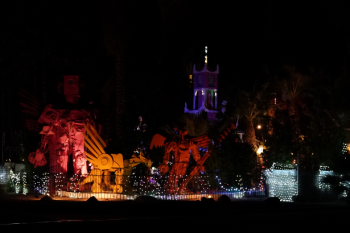 Season seven of the holiday hit will once again showcase the most extravagant and utterly spectacular Christmas displays America has to offer! In each one-hour episode, four families with dazzling household displays will compete to win $50,000 and the coveted Light Fight trophy. This season, viewers will also be treated to a second round of the special heavyweights episode, featuring light shows so massive, they extend well beyond household frames. Additionally, peek inside featured family homes for an impressive batch of unique interior Christmas displays, as judges Oosterhouse and Nayak lead the way in another year of over-the-top holiday cheer.

“701” (8:00-9:00 p.m. EST) – Let the holiday festivities begin! First to showcase their spectacular holiday displays are the Brewster family with their “Christmas in New York City” themed display, featuring a Herald Square stage with dancers inspired by The Rockettes and a massive Rockefeller Center tree in Brewerton, New York; the Chiles family with a “Miracle of a Million Lights” display covering outside and inside of an 1880s-era mansion with 60-foot-tall candy cane trees and a life-size snow globe in Portland, Oregon; the Sanda twins who combine their sophisticated DIY skills to create a unique freeform lighting technique never before seen on the show, featuring handmade motorized controls that create the illusion of twinkling lights and a nativity scene starring a homemade animatronic Santa bearing gifts in Glendale, Arizona; and the Rose family with their heartfelt holiday display covering every square inch of their house, featuring sensational handmade gingerbread cutouts, an inflatable hugging bear and a special garden area dedicated to the memory of their daughter in Hazlet, New Jersey. Tune in as judge Taniya Nayak makes the tough decision of who will be the first to walk away with $50,000 and the coveted Christmas Light trophy this holiday season on ABC’s “The Great Christmas Light Fight.”

“704” (9:00-10:00 p.m. EST) – The festivities continue with the Torres family’s pirate-themed Caribbean Christmas display, featuring a two-story handcrafted castle that covers the façade of their house, a life-sized pirate ship with cannons and a 35-foot mast in Henderson, Nevada; the Murphy family, with the help of their art class students, transforming their house into Christmas art with over 400 precisely cut figurines, 75 extravagant scenes and a massive 25-year-old Cinderella castle in West Frankfort, Illinois; the Howard family with an incredible light show that incorporates a giant multicolored mega tree and a violin playing as if it’s floating in the air in Fillmore, California; and the Taylor family with their magical forest display spanning across three acres, including over 50 beautifully lit trees covered in 500,000 lights and a 90-foot tree with 23,000 lights brightening up the massive wonderland in Henderson, Nevada. Watch as judge Carter Oosterhouse decides who Christmas will come early for as the winner of ABC’s “The Great Christmas Light Fight.”

About Fremantle
Fremantle is one of the largest and most successful creators, producers and distributors of scripted and unscripted content in the world. A global entertainment powerhouse, Fremantle has an outstanding international network of production teams, companies and labels in over 30 countries. Fremantle produces in excess of 12,000 hours of original programming, roll out more than 70 formats and air 400 programs a year worldwide. The group distributes over 20,000 hours of content in more than 200 territories. Fremantle is also a world leader in digital and branded entertainment, with more than 370 million subscribers across 1,500 social channels and over 100 billion views across all platforms.

Fremantle is part of RTL Group, a global leader across broadcast, content, and digital, itself a division of the international media giant Bertelsmann.