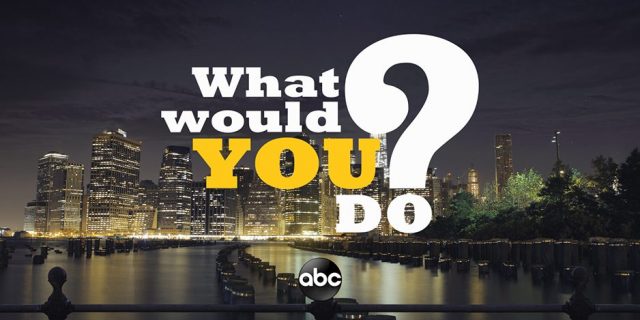 ‘WHAT WOULD YOU DO?’ EXPLORES HOW PEOPLE REACT WHEN A YOUNG WOMAN IS RACIALLY BULLIED

Features Scenario Inspired by the Possibility of Extraterrestrial Life and UFOs

Following reports of racial bullying in schools and online, a new episode of “What Would You Do?” explores how people react when teens are seen bullying a young woman because of her race. The episode also features a scenario inspired by Americans’ insatiable curiosity of unidentified flying objects and extraterrestrial life. “What Would You Do?” airs Friday, Sept. 6 (9:00 – 10:00 p.m. EDT), on ABC.

“What Would You Do?” with anchor John Quiñones reveals how people behave when they think no one is watching by using hidden cameras to record real reactions to thought-provoking scenarios created by actors.

Friday, Sept. 6, scenarios include the following:

Ethan Nelson is the executive producer of “What Would You Do?” for Lincoln Square Productions.