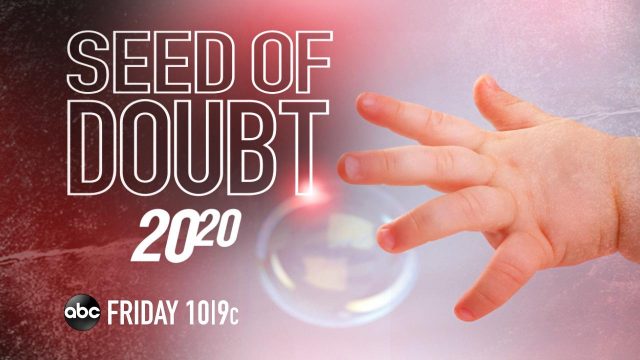 ‘20/20’ EXCLUSIVELY DOCUMENTS EMOTIONAL JOURNEY OF A WOMAN WHO BELIEVED SHE WAS CONCEIVED BY AN ANONYMOUS SPERM DONOR, ONLY TO DISCOVER HER BIOLOGICAL FATHER IS ACTUALLY HER MOTHER’S FORMER FERTILITY DOCTOR

A “20/20” documentary event exclusively documents the emotional journey of Eve Wiley as she searches for her biological father. Eve was conceived with the help of a sperm donor and thought she found her father 14 years ago when she was united with “Donor 106” from the sperm bank’s records, and the two formed a loving father-daughter relationship. But recently, as Eve searched DNA websites for siblings, she was shocked to discover that “Donor 106” wasn’t her father and instead, her biological father is her mother’s former fertility doctor. With the help of world-renowned DNA detective and ABC News consultant CeCe Moore and alongside ABC News investigative correspondent Kyra Phillips, Eve uncovers these startling revelations and exclusively takes “20/20” cameras along as she reaches out for the first time to the man who she now knows is her biological father. “20/20” airs Friday, May 3 (10:00 – 11:00 p.m. EDT), on ABC.

“20/20” features interviews with Margo Williams, Eve’s mother, who describes her own feelings about learning that her doctor used his own sperm in her artificial insemination, something she says she never agreed to; Steve Scholl, also known as “Donor 106,” who Margo and Eve believed was Eve’s biological father; and Blake Wiley, Eve’s husband.

When Eve was 18 years old she connected with Scholl and they quickly formed a close bond – Scholl even officiated at Eve’s wedding. But in 2018, Eve completed an online DNA kit and discovered that she had additional siblings. Eve urged Scholl to do the same, so he could have the opportunity to connect with his other biological children. The result was heartbreaking as it became evident that Scholl and Eve were not related. Since Eve discovered her father’s true identity, she has connected with an entire online community of offspring of other “doctor daddies,” donor-conceived children who have also made the startling discovery that their biological fathers were not anonymous sperm donors, but instead their mother’s fertility doctors. Just weeks ago, Eve lobbied Texas state legislators to make fertility fraud a new category of sexual assault, and the state Senate approved the bill unanimously.