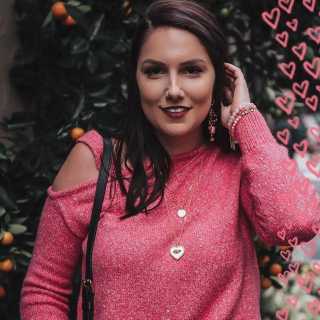 Hollywood, California (The Hollywood Times) 4/15/2019 – In a world where being an influencer is a profession, Adaleta Avdić proves that if you are passionate, driven and have a true love for what it is that you want to, you can accomplish anything you set your mind to.

Born in Bosnia in the early ‘90s, Avdić moved to the United States as a refugee at only five years old. Having escaped a life of hardship and war, her and her family arrived in Philadelphia, Pennsylvania where they were part of a Catholic refugee rescue, taken in by a Catholic priest and his family. At such a young age, Avdić never would have pictured her future living the life she does now.

Growing up, Avdić wanted to be a lawyer. This stemmed from her ability to talk her way out of anything and beautifully defend any point. However, as she got older and realized how much schooling was involved, she realized being a lawyer was not what she was meant to do. She began working at 16-years-old and went on to graduate from the University of Arizona, with a degree in Psychology and a minor in Business Writing.

She established her blog adaatude.com in 2013 as part of a senior class college project. Over the years, Avdić’s blog has gained an audience of 85,000 readers with 47,000 unique page views a month. Now known globally as @adaatude on social media, Avdić is an accomplished Social Media Influencer and well-known blogger that covers various topics including beauty, travel, lifestyle and fashion. Along with having roughly 600,000 Instagram followers, Avdić maintains a YouTube channel with over 10,000 followers.

“It’s been an interesting shift where we started off with just writing reviews, we moved into images, and now we’re really moving into video,” said Avdić. “It’s been kind of the less written word the better, but I still love my writing.”

Having such a large audience across multiple social media platforms, the 28-year-old decided to hire a team to help her engage with her followers and create the quality content she envisions. Her team includes an assistant, a social media strategist, a videographer, a website designer and a website developer. Having gone from doing it all on her own for years to now having a team of people to help her, Avdić knew involving others was essential to grow her brand.

“It seems a little excessive but it’s truly a business and it needs more than one person. Like they say, ‘Rome wasn’t built in a day and it was not built by one person.’ So originally what I was doing was fine, but in order for it to be a business and to make a profit, it definitely needs the help of other people because I would never sleep without help.”

Being sought after by so many different brands, the social media influencer has had many opportunities to collaborate with companies to sample and review products and, as of recent, design them. Avdić recently collaborated with Sequin Jewelry to design her own necklace. Prior to their collaboration, Sequin had gifted her pieces of jewelry to review and Avdić developed a true love for the brand, noting their cute charms and gems and admiring how each piece was handmade in-store.

“At some point I had reached out to them and said ‘let’s try to do something together because there’s been a lot of I’ll post the necklace, you guys will repost it, how do we work together?’ And so we came up with the idea that I would create my own necklace based on the charms and the gems that I really liked, but I really wanted it to also be something that other people could enjoy.”

Avdić’s design is a three-layer necklace featuring some of her favorite things: a heart, the evil eye, the hamsa, the stars and planets. The heart symbolizes that everyone needs love in their life, whether it’s the love for a significant other, family member, for ourselves, etc. The evil eye is meant to protect us and to keep out negativity. The hamsa is another protector that brings happiness, luck, health and good fortune. The stars are meant to remind us that we are stardust, part of a very large planet, solar system and world.

“Each charm had a meaning of its own and I think together it signifies the idea that you want to make sure to keep the negative energy out, have this positive outlook on life, you are surrounded by love, and you remind yourself every day that you are a star but to think about others as well. It was a very convoluted theme, but I think it really applies to most people. It was the three biggest pillars of what I constantly preach in terms of my content and in terms of what I believe in myself.”

Avdić’s success has been gained through years of trial and error, rebranding, dedication, networking, and producing high-quality content. Although she had the advantage of starting this whole journey before the concept of being an influencer even existed, her drive and passion is what has made her the well-known blogger she is today.

“My biggest piece of advice for people starting out now is that you gotta have something that sets you apart from everybody else…To be this general lifestyle creator is so much harder now just because it’s so competitive and you have to find something that you’re really talented in and that you’re passionate in as well. It’s got to be something that comes naturally to you rather versus ‘oh I’m just gonna go do fashion because I want free clothes.’ There’s gotta be something magical about your love for it because if there isn’t, it’s not going to be as passionate to the people who you are trying to have consume your content.”