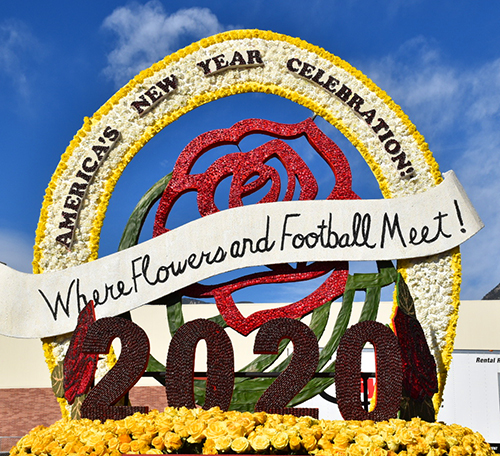 Pasadena, CA, (The Hollywood Times) 1/2/2020–‘The Power of Hope’ was the theme for this year’s 131st Rose Parade. The parade began at 8:00 a.m. and ran until 12:00 p.m. on January 1, 2020. Over 37,000,000 people watched the parade in person and on tv. As the parade ended, the floats were transported to their new location without missing a beat and were put on display in the Rose Parade’s annual A Showcase of Floats. Fans were given the opportunity to come out and get a closer look at each float and take pictures.

The two day event ran from 1:00 p.m. to 5:00 p.m., January 1st and 2nd, displaying a colorful collection of floats covering a 2 mile display area. Attendees were able to see and get a better idea of all the work that goes into creating and decorating the floats. You can see our pre-parade viewing story here: The 131st Rose Parade Decoration and Viewing Event: A Inside Look.

Most 2020 parade enthusiasts fell into one of three groups.

Group 1
Those who braved the cold temperatures in Pasadena, California and camped out New Year’s Eve night, December 31, 2019 to watch the 2020 Rose Parade in person on January 1, 2020. This group lined the parade route anticipating an awe inspiring series of floats to pass right before their eyes.

Group 2
This group of parade enthusiasts passed on freezing temps, searching for a place to go to the restroom in comfort and safety, and all that accompanies camping out on the streets of Pasadena. These parade lovers were snuggled in their jammies sipping on hot coffee or cocoa and gleefully watched the 131st Rose Parade from the comfort of their very own homes.

Group 3
The third group includes those who did not attend the parade and did or did not watch the parade on television and decided to go and view the floats in person for closer inspection.

Despite the grouping you are connected with, this year the Rose Parade’s A Showcase of Floats brought out 80,000+ visitors to Sierra Madre and Washington Boulevards in Pasadena where the amazing works of art were displayed. The event seeks to improve a visitor’s experience each and every year.

Visitors enjoyed the fair like atmosphere as they were able to purchase food, kettle corn, and Rose Parade souvenirs while being entertained by live performers singing a medley of songs on a staged area near the entrance of the site. They were also given the chance to create a mini bouquet, tour a tiny house, and collect float collector cards (a 3 1/2 x 2 1/2 sized card with a specific float on the front and a puzzle piece on the back) that created an 8.5 x 11 mini poster of the Rose Parade’s ‘The Power of Hope’ 2020 themed poster.

Young Jaden M. hurries to collect one of his last cards needed to complete his ‘The Power of Hope’ poster.

A Showcase of Floats-Nine Collector Cards

Back side of cards displaying poster of ‘The Power of Hope’

A Showcase of Floats Gallery

A couple of visitors gave THT their thoughts on the event.

”This is my first time here. Everything is beautiful and incredible. I think it’s worth coming and I will be back next year. Next year when I come, I will bring my friends with me.”
Miaka from Orange County

”This is my second time (visiting the Showcase of Floats event). It’s been eight years since the last time I was here. And it’s their first time (pointing to his family members). It’s amazing what they are doing with the floats. It’s very crowded… so dealing with the crowd is always… but the floats are amazing. I would tell people to come if you’ve never experienced it because we all watch it on tv every year (the Rose Parade) and there’s nothing like seeing it up close. Even if you don’t do it every year, it’s something you’ve got to see.”
Mark and family
from Winnetka, CA

The sun sets on another eventful A Showcase of Floats exhibit.