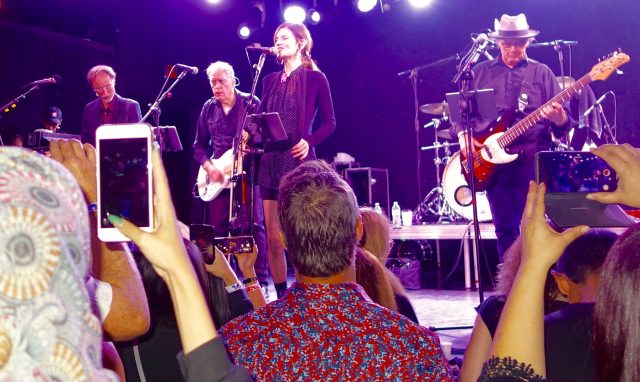 When 10,000 Maniacs played the Teragram Ballroom on September 17, 2019, there was a grungy presence lurking in the shadows. Despite Mary Ramsey marking 25-years as the band’s lead singer, a good percentage of the public seem to believe that ignorance is bliss. They remain convinced that Natalie Merchant is the lead singer of a band she left in 1993. Such fruitless conviction is a withered tree in the desert of a distant past. Indeed, given the band’s powerful and passionate performance in Los Angeles, isn’t it time to move on from what was and celebrate what is?

In 1981, 10,000 Maniacs was founded in Jamestown, New York as an American alternative rock band. Most of the original lineup of the band, meaning the lineup that first recorded together, remains to this day. Thus, John Lombardo still rocks his guitar, Steve Gustafson plucks his bass, Jerry Augustyniak beats his drums, and Dennis Drew plays his keyboards. After years of success, lead singer Natalie Merchant left the band to pursue a solo career in 1993. The headstrong singer announced her departure on MTV on August 5, 1993, claiming that she “didn’t want art by committee anymore.”

The band’s last major shows were the MTV Inaugural Ball for President Clinton in January of 1993 and a second stint on MTV Unplugged on April 21st of that year. During the MTV Unplugged performance, Natalie Merchant’s alienation from the rest of the band was palpable. An argument can be made that Merchant was struggling with LSD, not to be confused with the drug or any other. Coined by the late Chester Bennington in a private conversation with this writer in 2007, LSD was used to describe Scott Weiland of Stone Temple Pilots and Velvet Revolver. LSD is otherwise known as “Lead Singer’s Disease.” LSD is when the singer believes they are not only the center of the band but maybe the center of the world as well.

When it came to her work as the lead singer of 10,000 Maniacs, Merchant didn’t like sharing the credit for the songs with other band members. She also felt like she was being forced by the record company to sign over the rights to her work. In response, Merchant has self-funded every recording project since 10,000 Maniacs, therefore keeping a strategic distance between her creative work and the control exerted by the major record companies. Despite an exit stage left that signaled a preference for her path, the band held no ill-feelings towards their former lead singer. Hence, when asked about the break-up, Dennis Drew recently said, “We love Natalie, we love her, and the time we spent with her was very special.”

The time spent with Natalie, however, was long ago, and since her departure, the band has a discography of more than ten studio, live, movie soundtrack, and compilation albums. Playing her violin and commanding the stage, Mary Ramsey is a worthy replacement for the legendary lead singer. Compared to Merchant’s initial run, Ramsey has spent twice as many years as lead singer. Thus, one would think that after a quarter of a century, people would be aware of the switch. They would know the reality of the band’s current lineup. They would not expect Merchant to be leading the way.

However, despite this seemingly obvious realization, this is not the case. For some reason, Merchant’s presence continues to stick to the band like glue. Although she isn’t the only major presence to be replaced, her shadow is way longer than any other. Not only in this band but in almost any band. For some reason, Merchant came to define the band for so many people that they cannot imagine 10,000 Maniacs without her. However, the band has continued to thrive since her departure and the loss of another founding member.

Tragically, hard-drinking lead guitarist Rob Buck died of liver failure in 2000. Influential in the band’s early success, Buck penned the music to several of their most famous songs, including “Hey Jack Kerouac,” “What’s the Matter Here?” and “These Are the Days.” Dennis Drew describes how Buck’s adventuresome spirit inspired the band to go for the gold in the early days, saying, “He was someone who loved music. He’d grab his guitar, get in his car and jump onstage with bands, long as they were playing original music. He proved to all the guitar players in town—Yes, you can do this!”

Jeff Erickson filled the void left by Buck’s sad death, and he now has been the band’s lead guitarist and co-vocalist for over eighteen years. Nobody wonders whether the late Buck is still playing with the band, and the fans have embraced Erickson. The same degree of acceptance, however, has not been the experience of Mary Ramsey. Although die hard fans love Ramsey and celebrate her talent, many others are not even aware of her existence. Such a question mark at the core of a top band is indeed strange.

Indeed, before the show at the Teragram Ballroom, a poll was taken by this writer. Over a dozen fans, waiting for the concert to begin, were asked about the lead singer. Of those questioned, more than half thought that Natalie Merchant would be the band’s lead singer. Upon being told otherwise, many of these fans expressed shock. They could not believe that Natalie Merchant had not been the band’s lead singer for over twenty-five years. It’s hard to fathom how such obliviousness has persisted for so long.

Speaking with the son of keyboardist Dennis Drew, who was selling the band’s merchandise in the lobby, it turns out that this lack of awareness is an ongoing issue. For some reason, 10,000 Maniacs cannot shed the lingering skin of Natalie Merchant. He mentioned how people continue to come up to Mary Ramsey after shows and say with oblivious smiles, “Natalie, that was such a great show!”

Twenty-five years later, it still gets under her skin. And it should! A lovely singer and violinist, Mary Ramsey is a star in her own right. She not only has filled in the hole left behind by Merchant; she also has carved out her territory as the band’s effervescent lead singer. She displays passion on stage, showing up and shining bright at every show. It seems downright crazy that fans still think that Natalie Merchant is the lead singer of the band. Although her impact and voice are undeniable, it’s not like Merchant is a massive supernova of musical perfection that cannot be eclipsed.

Without question, the performance put on by Mary Ramsey and 10,000 Maniacs at the Teragram Ballroom was fantastic. Beyond singing the classic hits of the band that originated with some other lead singer, she sang many originals that kept the crowd bopping and hopping on the floor of this classic venue. Also, rivaling Patti Smith’s cover of the Bruce Springsteen hit, Mary Ramsey made “Because The Night” her anthem of musical independence. In the end, “love is a banquet on which we feed,” and the love between all the members of 10,000 Maniacs was palpable and pure in Los Angeles.

Welcome to 2019! The first lead singer of 10,000 Maniacs has not played with the band for over a quarter of a century. The cash drawer of that Merchant is empty, and it’s time to move on to a whole new store. Mary Ramsey is the owner of this well-established venture with the other long-term members of the band. Together, they continue to lead 9,999 Maniacs into the celebratory sunshine of the 21st century.