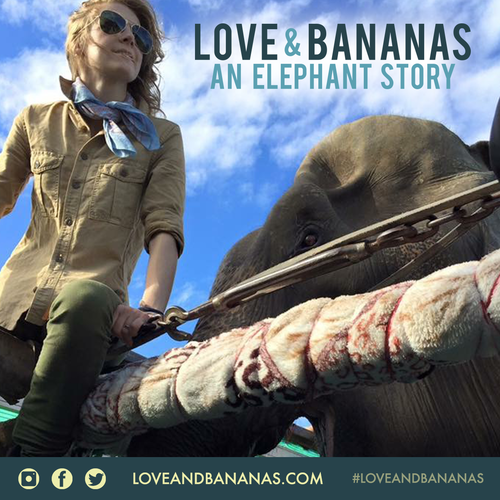 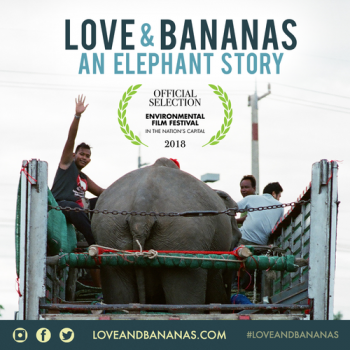 Back by popular demand Love & Bananas: An Elephant Story Returns to NYC and LA on July 20th for week long engagements in support of the protection of Asian Elephants,

New York, NY / Los Angeles, CA – July 17, 2018 – On the eve of Kat Kramer’s Films That Change The World 10th Anniversary Celebration screening of Love & Bananas: An Elephant Story hosted by Ed Asner, Ed Begley, Jr., Billy Bob Thornton, Louis Gossett Jr., Tippi Hendren, Sharon Stone, Kristin Davis and many others, Abramorama has announced the return of Love & Bananas: An Elephant Story, re-opening in theaters in New York and Los Angeles on July 20th due to popular demand. With engagements in over 80+ theaters across the U.S. and Canada, the powerful and heartwarming documentary will be available exclusively on iTunes beginning July 24, 2018. The filmmaking team is donating 10% of each purchase via iTunes to the Cambodia Wildlife Sanctuary. Love & Bananas: An Elephant Story will air on STARZ on July 30th at 9 PM ET and will also be available on the STARZ app beginning on July 30th.

With an outpouring of love and support for the film, GreaterGood.org has also signed back on to create their second “Love & Bananas Fund,” following their successful $ 80,000+ fundraiser that procured underwriting for a rescue mission of an Asian elephant named Sivilai, provided critically needed medical equipment for the Elephant Nature Park sanctuary, and helped break ground on a chain free sanctuary in Laos.

To celebrate the upcoming digital release of the film Love & Bananas: An Elephant Story, GreaterGood.org is currently raising funds for the release of a trekking elephant named Fah Mui. To support the release of Fah Mui and other Asian Elephants, please visit: loveandbananasfund.org

Abramorama’s Chief Operating Officer Karol Martesko-Fenster, stated, “We are thrilled that the film is returning to NY and LA and that we have so many organizations and colleagues rallying around Love & Bananas: An Elephant Story. We look forward to working closely with Grumble Grumble, Change For Balance, and Campfire as we bring Asian elephant Noi Na’s story to fans around the world.” 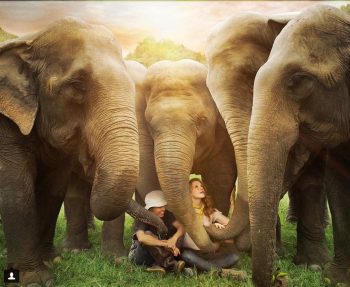 Ashley Bell’s feature film directorial debut Love & Bananas: An Elephant Story has left an emotional and heartfelt response amongst press and movie goers alike. Along with world renowned Asian elephant conservationist, Sangdeaun Lek Chailert, the fearless leader behind the movement, audiences across the world are jumping into action to educate themselves and work to save these animals.

Kat Kramer, founder of the ‘Films That Change The World’ series added, “I saw Ashley Bell’s impactful, moving and inspirational film Love & Bananas: An Elephant Story and decided I must include it as part of the 10th Anniversary Celebration for my international cinema series. It is the elephant rescue film of the moment and will open hearts and minds to the cruel treatment of Asian elephants in captivity.

The theme for our 10th Anniversary is “SHEroes For Change,” and Ashley Bell, Lek Chailert, and Noi Na, the Asian Elephant definitely lead the pack. “

Love & Bananas: An Elephant Story aims to ignite a new way of thinking about this species and shows us what can be done to prevent the abuse of captive Asian elephants. The rapidly decreasing numbers of elephants in the world, combined with the popularity of elephant trekking camps and recent announcement to lift a ban on “trophy” elephant imports, makes this a timely and important film as it presents a solution to the problem.

Through the heartwarming, yet dangerous journey that Lek and Ashley make to bring one elephant from trekking camp to sanctuary, the film depicts a better way to co-exist with and enjoy elephants that will not put them at risk.

Actress/Director Ashley Bell recounts her experience making Love & Bananas: An Elephant Story, in her new book for independent filmmakers and aspiring filmmakers called, ‘Shoot It. Sell It. Show It. How I Made An Independent Film With Grit and Google.’ It is a comprehensive guide to all the things you won’t learn in film school, including words of advice from seasoned industry pros.

Abramorama is handling the global release and rights management for the film in collaboration with Cargo Films & Releasing on behalf of production companies Grumble Grumble, Change For Balance and Campfire.

For more information and to see the trailer and please visit: www.loveandbanana

Abramorama is the preeminent global theatrical distribution and rights management partner for music films today and is recognized for the consistent high quality of its work on award winning feature films. An innovator in the focused, personalized form of film distribution and event cinema, Abramorama provides invaluable alternatives to filmmakers and content owners. An industry leader in marketing, promotion, and distribution, Abramorama continues to trail-blaze exciting new pathways for filmmakers to find their audience.

About Kat Kramer’s Films That Change The World

Kat Kramer’s Films That Change The World is a unique cinema series highlighting socially significant films. Founded in 2009 by actress/producer/activist Katharine “Kat” Kramer to raise awareness about current social issues, she presents a combination of red carpet premieres and “think-tank” panels. By taking this socially conscious path, Kat is following in the footsteps of her late father, Legendary award-winning filmmaker Stanley Kramer. She created the “Hunt For Humanity Award” in honor of “actorvist/humanitarian” Marsha Hunt, and she established this on-going award in conjunction with the screening series. For more info visit www.katkramersfilmsthatchangetheworld.com

GreaterGood.org is a 501(c)(3) charitable organization that works to improve the health and well-being of people, pets, and the planet. Over the last 10 years, GreaterGood.org has given over $150 million in cash and in-kind grants to over 5,000 charitable partners worldwide. To learn more, visit GreaterGood.org or follow us on Facebook , Twitter or Instagram.

GreaterGood.com is the world’s largest online social cause network. GreaterGood strives to connect a passionate audience with simple online tools to make the world a better place. We turn your desire to make a difference into tangible, documented support for charities that help people, save pets, and improve the planet. By connecting millions of caring people like you, we have created an online community with real power to change the world.

Founded in 2012, Grumble Grumble, the vision of actress and director Ashley Bell, is a production company focused on telling inspirational stories about human resilience and the triumph of the underdog. The company’s first project is the 2018 documentary Love & Bananas: An Elephant Story.

About Change For Balance

Co-founded by Roddy Tabatabai and John Michael McCarthy Change For Balance is a production company and creative agency which for more than 10 years has worked on issues ranging from HIV and AIDS relief efforts in South Africa, open-air chemical testing in Hawaii, deforestation in the Congo and Sumatra, and women’s rights globally. Change for Balance uses the power of story-telling to bring awareness to those working for human rights, animal rights, environmental awareness, and social justice. Love & Bananas: An Elephant Story is Change For Balance’s first feature film.

Founded in 2014 by producer Ross Dinerstein, Campfire is a film and television production company that produces across genres and mediums. Recent projects include multiple Netflix Originals: REBIRTH, CLINICAL, 1922, and the forthcoming films 6 BALLOONS, and THE EGGPLANT EMOJI MOVIE.