Anaheim, CA (The Hollywood Times) 1/17/18 – – Alex Cole performed on Friday January 25, 2018 at the Foundation Room inside House of Blues Anaheim and blew everyone away.  The combination of his high energy and original written rock tunes makes him a true Retro-Rock star. 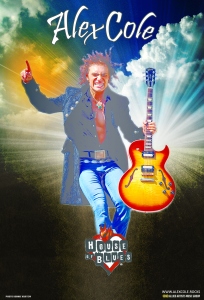 Alex Cole was born in Milan, Italy, where he had been studying music throughout his life until he finally took the plunge and moved to Los Angeles to pursue music full time. Alex wanted to be a rock artist in the American way, which meant reinventing the way Americans listened to rock music. He took all of his inspirations including Elvis Presley, Cream, Jerry Lee Lewis, and James Brown (just to name a few) and created a new genre: Retro-Rock. In hopes to get the young generation listening to rock again, Alex states, “Retro-Rock combines the old with the new” for fresh ears. He will surely be part of the vinyl revival. 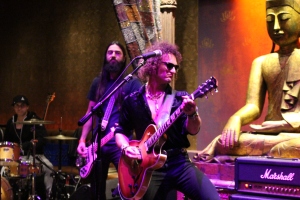 Alex described a little bit about his writing process, “When I write, I pick up my guitar and I start writing down something energetic, and I think about the beat of the drum” and made sure to clarify “my songs reflect me having fun.” The second Alex hit the stage it was clear that he wanted the audience to have fun at every moment.  He walked on stage dressed like a real guitar hero; curly hair, half unbuttoned long sleeve shirt, black long pants, and a smile with his tongue sticking out saying “Let’s Rock!” His charismatic stage presence kept everyone engaged and ready to go on a musical journey. Alex made eye contact with the audience and really made sure to connect and engage. 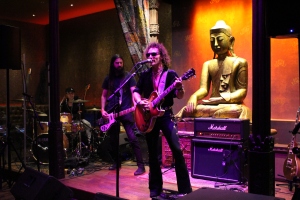 What is amazing about Alex’s performance at the House of Blues is that he did not stop in between songs. He kept going by creating melodic riffs that would transition into the next song.  He had the stamina for a marathon up there as he exuberantly played his original music. The high level of energy was bouncing back and forth from Alex to the audience.

Be sure to follow Alex Cole on social media to be part of some high Rock N’ Roll energy. Visit his website at alexcolerocks.com