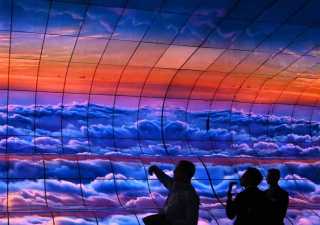 Las Vegas, NV (The Hollywood Times) 1/13/19 – As your itinerant reporter trudged toward the door at the Sands Expo Center as the final day of  CES was approaching it’s 4 o’clock closing time, he was waylaid by Brian O’Donnell at the MOTOBAG booth. Brian asked your reporter if he would like to ride a suitcase through the airport. Intrigued, a skeptical “Ok” was offered. On the floor was a device the size of a large litigation bag equipped with four wheels and a hidden motor. After Bryan assured your reporter that his partner, is 6’4”  and over 400 pounds could ride the bag, your reporter mounted up. As shown by the photographic evidence below (no photoshopping involved), it was indeed possible to ride the MODOBAG. In fact it was quite fast even on a carpeted surface. The MODOBAG is not just a riding platform but is a suitcase with a fair amount of room inside.  The motor, battery and steering assemble take up only about 10% or so of the total volume. When Brian politely declined your reporter’s offer to ride the bag the quarter mile to the exit door, the only recourse was to conduct a final CES interview.

Like most companies at CES MODOBAG is relatively new. They first appeared at CES in 2017 and have been selling the product since August of that year. They apparently hit a sweet spot in the market and over 3000 of the smart bags were sold in 2018 by the Chicago, Illinois based company. The current price is $1,495 and sales are made directly through the website at www.Modobag.com

Brian, who is COO of the company was joined by Tim Ryan who is the chief marketing officer, Tim seemed happy to give his time for the interview even though he had actually been headed out the door. The key technology of the smart bag is a lithium titanium battery which costs approximately 10 times the standard lithium ion battery. However, unlike the lithium ion battery the MODOBAG battery is fully FAA, TSA and IATA compliant. I. E. It does not catch fire randomly and can be taken on airplanes and other public transportation.

When asked for a short description of his product Tim replied “Fun and Function”. Your reporter can imagine riding through the morass of Chicago’s O’Hare, Atlanta’s Hartsfield or London’s Heathrow airports without concern for the long distances between gates.  With it’s speed the smart bag will even help in making those close connections. There is even an attachment which will tow a four wheel suitcase behind.
The company is privately funded with no venture capital at the present time. The start up assistance company Arrow Tech helped with in the initial startup phase. $1 million in start up funds was also raised through Indiegogo in 10 days. The components are presently assembled in Chicago. While the current package tips the scales at approximately 20 pounds, the goal is to achieve a 15 pound empty weight, including the battery.

The offer to do a demonstration ride to the exit having been politely declined, your reporter trudged through the Sands Expo Center watching the various exhibitors take down their booths and join him in his truck to the door and transportation. What an experience for an engineer and patent attorney. More articles will come in the following days. The iPad (i.e. the yellow legal pad which I own) is loaded with notes. Preparing new articles from those notes will allow your reporter to revisit the most enjoyable experience which was CES 2019.