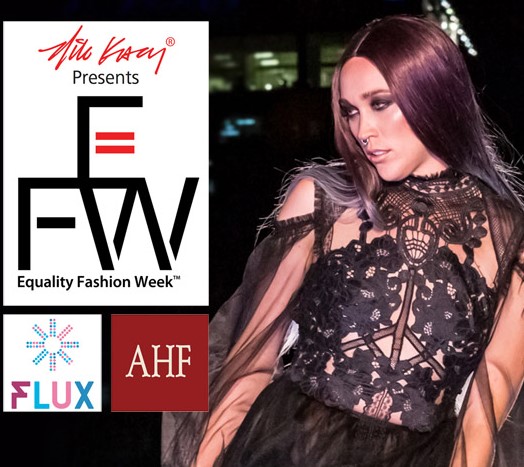 This year’s event is open to designers from LA and beyond. This year’s show features 10 designers, including Sharpe Suiting, FemHause, Shakita Wylie, Jovan Wolf, Unapologetic Company, Morgasm, Geeky Junky, and more. Additionally, the event will present an Emerging Designer Award grant as another opportunity to ‘give back’ and further the community.

EFW gives designers an additional platform as entrepreneurs to express and market themselves by creating a unique marketplace to enable opportunities for economic development through promotion, sales, and potential partnerships.

EFW will also donate a portion of this year’s event proceeds to TransLatin@ Coalition, this year’s partner, non-profit organization.

The 2019 EFW kickoff fashion show will take place on Sunday, October 13th, 2019 from 8 – 10 PM at the iconic Globe Theatre, 740 South Broadway, Los Angeles, CA 90014. The event begins with a special preview and red carpet arrivals at 6:30 PM. The official VIP EFW After Party will immediately follow the conclusion of the fashion show.

Tickets can be purchased via Eventbrite at 2019 EFW Fashion Show Opening Gala and After-Party.

EFW creator and event producer NiK Kacy is dedicated to the local and global LGBTQ+ community in raising awareness, visibility, education, and supporting the community at large through economic and social development. Kacy, who identifies as non-binary and uses the pronouns they/them/theirs, had attended and presented their footwear and accessories line at queer fashion shows in other cities, but not Los Angeles until they created EFW last year.

Per Kacy: “As a community, lesbian, transgender, and queer members are the most under-represented of the group and often not visible to the mainstream and even within our own community. My hope for EFW is to continue to develop a week-long event each year to give a platform for queer artists and designers to not only express themselves but also help create awareness and financial opportunities for them.”

The Hollywood Times is proud to be a media partner for this event!