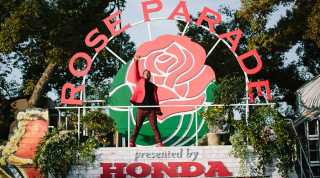 Pasadena, Califorinia (The Hollywood Times) – 1/2/19 – Despite the snafu at the end that brought out giant tow trucks, semis, and had cavalry units and bands maneuvering around the smoking Union Pacific float, the 2019 Tournament of Roses Parade lived up to the expectations Americans have come to depend on in ushering in the New Year.

It felt rather fitting that the sun came up over the TV camera scaffolding, from THT’s position on the famed corner of Orange Grove and Colorado Blvd., lighting up the spectacle, right at the beginning of the festivities.

Each float, band, equestrian unit and honored figure that made the turn did so with style, charm, fun, and New Year’s spirit.

After the opening show and the appearance of this year’s Grand Marshal, Chaka Khan the floats began with the Judges Award winner, the Donate Life Float.

In the past few days over at Fiesta Floats in Irwindale, home to about 15 floats that were being constructed and decorated, the Donate Life Float already began generating a buzz. Featuring the faces of nearly 50 individuals who, in death, gave life to others through organ donation adorned the sides of the drums on the rear half of the float. Then the moving gesture was completed with the appearance of some of the recipients of those organs riding on the float. The joy and greetings of hundreds of thousands in the crowds at the parade were at their peak right away with this first float of the morning.

As the procession then continued, the bands opened with Flower Mound High School from Texas. At 360 members, the largest of the school bands (high school or college), this band is widely regarded as among the best in the nation and didn’t disappoint.

Each of the participants in the Rose Bowl, Ohio State and Washington, marched with great pride to the cheers of legions of fans for each team that dominated the crowd in their red and purple colors, respectively. Both universities were joined this year by neighboring high school bands.

Pickerington High School from Pickerington, Ohio brought 344 members under the direction of Nathan Stowe and Gregory Benson. The Ohio State faithful rose to their feet welcoming many possible future Buckeyes as the marched by.

The same could be said for Mercer Island, Washington. One of the most uniquely dedicated communities to music and band for their young people, the band was overjoyed to meet and march with the Washington Husky band. Some of whom are Mercer Island alumni.

But the Mercer story goes well beyond their 4th appearance in the Tournament of Roses. Over a year ago, the students of Mercer Island heard about the plight of fellow 2019 Rose Parade Invitee, Banda Escolar de Guayanilla from Puerto Rico. Only days after they received their invitation, Hurricane Maria ripped through our island neighbor. Destroying homes, lives and communities, Hurricane Maria left the B.E.G. as they are commonly called with no ability to prepare to march or attempt to mount a funding campaign to come to Pasadena.

The students of Mercer Island stepped up without any prompting from adults and led a fundraising campaign to help B.E.G. realize their well-deserved place in the 2019 Rose Parade. Over the course of a year exchanges between Mercer Island and B.E.G. included small contingents on both sides visiting and marching in each other’s events.

The Mercer Island kids and adults that visited Puerto Rico came away changed for life in terms of their perspective on life, witnessing the positivity of people still rebuilding today. In total the students raised over $50,000 for B.E.G. to make the trip to Southern California. In the process, they have built a relationship that both sides intend to continue to build well in to the future.

The air of honor-through-tragedy carried further with the appearance of the legendary Budweiser Clydesdales pulling their iconic stagecoach that was built in 1903. On top of that stagecoach 10 fire captains from Paradise, CA rode along to the cheers of the appreciative crowds. In an amazing further connection through the tiny-island-Seattle-suburb that is Mercer Island, their current superintendent of schools, Donna Colosky, was superintendent in Paradise Unified District only two years ago.

She encourages all people to try and kiip the people of Paradise in their minds even after the news stories fade and the welcome tributes wane. “I believe that especially for the kids and the families, they’re still in a place of grieving. When I talk to friends who have lost everything, they really are just living day-to-day as they try to figure out what’s the next step.”

The cavalcade of color and wonder continued with every float that rode past our eyes. With a combined millions of flowers and other natural elements decorating each one, different floats fired out streamers, moved, shook, blew bubbles, and featured riders from all walks of life. Among the many award winners and great stories, a few stood out. The AIDS Health Foundation got some attention for stepping out of the box a little in presenting a float dedicated to our nation’s homeless crisis. As Ged Kenslea, Senior Director of Communications, the issue of homelessness for the AHF hearkens back to their early days when hospice care was a significant portion of the foundation’s service to AIDS patients. Now, this year’s Rose Parade float serves as publicity for their new initiative to buy and refurbish old hotels in run down areas of cities across the country. Once the refurbish is complete, these buildings will house thousands of homeless Americans. Other highlights included the Stella Rosa, the Dole, and the Easterseals float celebrating 100 years of existence for that organization.

Once again, the Tournament of Roses has ushered in a new year with pageantry, grace, dignity, and fun for the 130th time. Barry Trobaugh, director of debut high school band participant Munford High School from Munford, TN summed it up very simply. “This is America’s New Year’s celebration. This is it.”