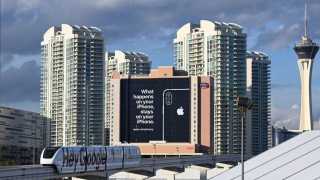 Las Vegas, NV (The Hollywood Times) 1/9/19 – The world’s largest Tech show is being held in Las Vegas this week. You’re reporter has the privilege of covering the event for The Hollywood Times. “Covering”  Is actually a misnomer. There is no way any one person can “cover” the Consumer Electronic Show (CES) during the 4 days in which it runs.

CES is put on each year by the Consumer Technology Association a trade association representing members which generate over $350 billion dollars in consumer technology sales each year while supporting 15 million US jobs. While hyperbole is often not called for or overused, CES is truly the Monster show for the entire technology ecosystem. The numbers are staggering. 4500 exhibitors;  almost 2 million square feet of floor space in 3 venues; 180,000 attendees; 250 conference sections; 1100 speakers; and over 1200 startups from 50 countries.
One would think that registering as a reporter for  an established publication like the Hollywood times would be  a simple digital exercise for the operator of the worlds largest technology show. Not so much. The electronic registration process was cumbersome. The net result was your humble reporter had to register in person on Wednesday January 9th which was the 2nd day of the show. Due to they vastness of the South Hall of the Las Vegas convention center your reporter did not reach the intended 1st interview until the end of the day. However wandering through the cornucopia of displays netted several interesting interviews which will be reported later.

Just leaving the converted parking lot where the registration tent was erected resulted in the following encounters.
The well known truck company Kenworth has partnered with Toyota to develop a zero emission elecktronic truck. The vehicle uses hydrogen fuel cell technology which generates  electricity while converting hydrogen gas to water.  The current version of the technology is quite bulky but is no problem for the extended cab of a Kenworth truck.Hydrogen fuel cell technology overcomes a big drawback of the standard electric vehicles which use the now conventional electric battery pack. The problem with that technology is that the carbon footprint of the lithium batteries, starting with the mining of lithium and other Rare Earth metals, results in a vehicle having a carbon footprint  equal to driving a standard economy Sedan getting 30 miles per gallon  for 6 1/2 or more years . Thus there is very little, if any, carbon footprint savings for the planet.
Strolling by another outdoor booth you’re reporter was offered what turned out to be a delicious cup of water. It turns out a company named Zero Mass Water has developed hydro panels which look very much like solar panels. They use the energy of the Sun to draw air into the system and remove and recover water vapor.  Thus the water has no impurities. It is subsequently mineralized for flavor and proved very refreshing.

Passing by another booth your reporter was intrigued by a mock grocery store and gas station. Unfortunately the name of the company was not obtained but they have developed Software to use radio frequency chips embedded in   packaging to immediately connect the consumer with the product. Information is provided and the consumer can order the product for later delivery or remove it from a physical display and be automatically charged. No muss no fuss. Pick run and enjoy,  Never needing to talk to an actual human being.

Well that was just the parking lot. On to the big show. More to come.